It’s really strange looking back at these pictures now. An age before cruising in Scandinavia meant almost exclusively choosing a mega ship. An age just weeks away from the cataclysmic events of 9/11. A time, in short, when life was good, and I was getting ready to board the sparkling white Flamenco in Germany’s port of Kiel. 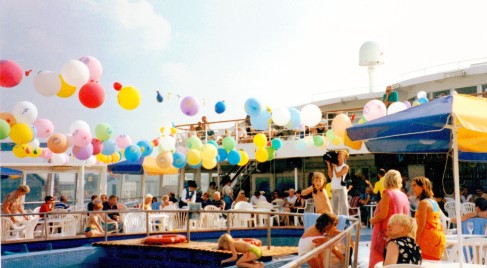 Festival Cruises was then a key player in the cruise market, but the events of 9/11 were to send it spiralling to the bottom in just three short years. But you would never have guessed it that sunny July day. I had flown into Hamburg on Lufthansa, where my pick up was waiting to drive me the short distance to Kiel. There were balloons and champagne on board and, right at that moment, I was excited about spending a week in the hopefully sunny, summer time Baltic region.

By this stage, the 1971- built Flamenco was into her fifth incarnation. She had started life in 1971 as the Spirit of London, before becoming the original Sun Princess, operating cruises along the west coast of Mexico, with summers in Alaska. In the late eighties, she went to Premier Cruises, running as the Starship Majestic on short, three and four day jaunts to the Bahamas out of Port Canaveral, Florida. The ship then went on charter to the Russian owned CTC cruises as the Southern Cross. As such, she sailed mainly from the UK. Flamenco finally arrived at Festival cruises when CTC went bankrupt in 2000.

Putting to sea from Kiel, the Flamenco sailed past the huge U-boat memorial at the harbour entrance. Kiel was a major German naval base during the Second World War, both for surface ships and U-boats and, as such, it was almost flattened by the RAF and the USAAF. The memorial commemorates Germany’s submarine service. Seven out of every ten U-boat men were lost with their boats; a rate of attrition equalled only by the losses sustained, ironically, by RAF bomber command pilots.

We were escorted out of port by the Stettin, a doughty, vintage ice breaker with a single, squat funnel. Luckily, we would not need her professional services; she was merely chugging along with us in her secondary roie as an excursion boat. Once the Flamenco stood out into the broad reaches of the Baltic, she quickly disappeared in our wake. A kind of darkness did eventually fall, and we were on our way to Russia. 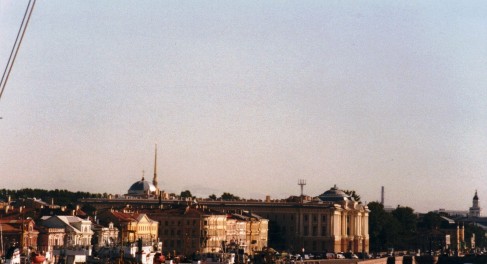 The small size of the Flamenco allowed her to dock, quite literally, in the middle of Saint Petersburg, almost right the way up the River Neva. From our vantage point on deck, we watched as a forest of onion domes loomed against the pale blue horizon. Gold spires glinted in the mid morning sun as the Flamenco cantered nimbly past a flotilla of huge, laid up Russian submarines, their crews waving up at the crisp white cruise ship as her lines went ashore, and our gangway kissed the holy soil of Mother Russia. We had twelve hours in which to experience one of the most amazing and convoluted cities on the face of the planet.

Saint Petersburg was in a state of transformation as it geared up to celebrate it’s 300th anniversary, due two years’ hence, in 2003. In that relatively brief span it has had three different names, been the capital of one of the great Imperial empires, and also the crucible of the Bolshevik revolution of 1917. It was the home of the doomed Nicholas and Alexandra, and these same waters we were now tied up in once played host to Rasputin’s bloated, bullet riddled corpse.

After the tumult of the bloody Communist takeover, it’s capture and destruction became a particular obsession for Adolf Hitler. Then known as Leningrad, the city was subjected to the most appalling and destructive siege of the war. Leningrad remained almost totally encircled for more than two and a half years; over a million of it’s citizens died of cold and starvation in circumstances too horrific to be understandable to western mentalities. And yet, the city was held. It later became a totemic player in the  Cold War because of it’s vast naval base. Then, with Gorbachev, Yeltsin and perestroika, yet another wind of change whistled down and through the streets and districts that had already witnessed so much

Much was being done to renovate the historic city for its big day. St. Petersburg was originally built by Peter the Great to be his ‘Window on the West’, and he toured the major western capitals extensively in search of inspiration. The result is a city of broad, sweeping boulevards and great, serried masses of Italianate architecture, especially along the tree lined terraces that hug the banks of the river. Canals thread through it’s entire centre, like tiny arteries. Vast, overblown bridges vault the sinuous, serpentine curve of the Neva. The result is a city that combines the coquettish elegance of Paris, the splendid scale of medieval Florence, and the amazing, water borne stance of Venice. It is quite a stunning brew. 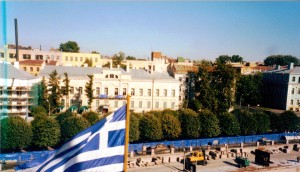 The city’s scars were still raw from it’s tremendous, tempestuous genesis; people were correct, rather than welcoming at that stage. But try living under an authoritarian regime like Communism for decades, and imagine how you might suddenly react when the shackles are abruptly struck off after soul destroying decades. Then, you suddenly find yourself greeting an influx of the very people that you had been conditioned to fear and hate for generations. Would any of us do any better?

The other clear highlight of that marvellous week was the little known gem that is Visby, on the Swedish holiday island of Gotland. If ever there was a place that could be classed as a true, almost completely intact medieval theme park, then this gorgeous old garrison town would surely be the top contender north of Rhodes. In many ways, it is even more beautiful than doughty old Tallinn. Not a claim that I would make lightly at all. 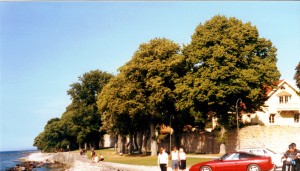 Visby was, essentially, another trading outpost of the Hanseatic League in the fourteenth century. Like many other vital points, it was fortified with vast, brooding turrets and castle keeps, encased behind winding, impassive walls many feet thick. Row upon row of stout, deadly cannon pointed open mouthed at the sea for centuries on end, waiting for an attack that never ever materialised. The result is the most perfectly intact series of walled fortifications anywhere in Scandinavia.

Inside the walled area are vast, rolling swathes of lush, tranquil parkland, with dancing fountains, stunning botanical gardens, and real gingerbread houses straight out of a Brothers Grimm fairy tale. There are swathes of roses everywhere, in a riot of different, delicate shades. Their sweet aroma combines with the scent of the Baltic, blown in on the breeze, to create something quite sensual, utterly unique to this amazing little jewel. 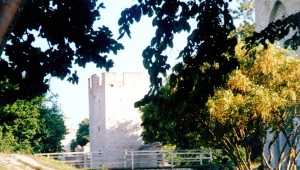 Visby is almost dreamlike; a place made perfect for lovers to stroll in hand in hand, or just to picnic under the trees. A string of umbrella shaded bars front the old walls, where the young and the young at heart linger till sundown over beers, coffee and some of the incredible local fish. The whole place could have been designed as a test ground for Kodak film. Staunch, still pristine ramparts are softened by a blaze of summer fauna in a dozen dazzling shades. Butterflies flit skittishly in and out of slits made for archers of old, many centuries ago. Truth is, the place is so damned pretty, it is hard to imagine anyone having a quarrel with it, let alone for it. 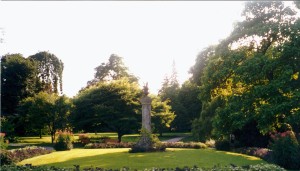 There is a long, languid beach that snakes for a fair old distance in front of the old town walls. In winter, I imagine the whole island would have a totally different stance; those towers and turrets would look a lot more sinister against an icy Baltic December, But this day, Visby was bathed in warm, welcoming sunshine, and the entire town seemed to have been dressed in it’s best colours, just for Flamenco and her passengers. 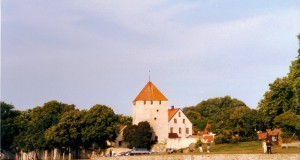 Another great advantage of the place is that Visby is not really up to handling the much larger cruise ships, and so consequently it does not get so much of the mainstream Baltic trade. Many of the seven and twelve day cruises that come here in summer tend- understandably- to concentrate on the ‘greatest hits’ ports of the region; St. Petersburg, Copenhagen, Helsinki, Stockholm and Tallinn. The big ticket places that most tourists are aware of, and want to see. They are easier to sell as destinations than some half realised, scarcely known outpost; one that often loses out thanks to it’s relative proximity to Stockholm, just a few hours away by regular ferry.

If anything, this kind of remote, off the beaten track aura just serves to burnish Visby’s almost gold chip beauty and allure. It definitely feels like a part of the world that is somehow adrift in it’s own time and space; a part of the modern world, and yet strangely disassociated from it. I have often thought that it would be a quite magical place to  visit for just a few days, in the height of the summer, during the long Swedish nights. 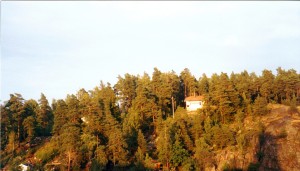 Ask anyone who has sailed these beautiful waters, and they will be sure to tell you that one of the highlights is sailing through the hundreds of small, exquisite islands of the Swedish archipelago. Long, low, and carpeted with dense ranks of deep, impassive pine forests, they must look to a bird above like so many random emeralds, flung heedlessly across a sparkling blue expanse of sun dappled sea.

It is scintillating stuff; spellbinding first thing in the morning, when the rising sun picks out the upper branches and burnishes the leaves to an almost perfect, golden glow. Anyone who has cruised New England in the fall would be instantly taken back there by the sight on offer here. The sheer, staggering beauty of those silent isles, often mirrored to almost perfect clarity on what looks like a sea of glass, can be almost overwhelming. Visual overkill on an epic scale.

But I would still say that they are at their best at sunset, seen from the deck of a slowly, almost imperceptibly moving ship. Giant ferns cast deep, expanding shadows on a sea turned a shade of liquid gold in the long, languid glow of a slowly setting sun. The air is different, somehow sharper and more vital. A sense of surreal calm and tranquility folds itself around you like a cashmere blanket. You hardly dare breathe, in case the moment shatters as carelessly as cracked glass.

In the mellow glow of that magnificent curtain call, all seemed well with the world. The passengers on the Flamenco savoured that moment like fine wine; everything around us was rich, vital and wondrous. Yet, even as we did so, some four thousand miles away, Mohammed Atta and his crazed cabal of ideologues were perfecting their ghastly, suicidal, game changing plan. September 11th was just scant weeks away. And no night- anywhere- has ever seemed quite so sweet or splendid ever since.