Antwerp lies some sixty miles inland, along the broad sweep of the River Scheldt as it leaves the North Sea. Capital of the Flanders region of Belgium, the population of around half a million makes it the most densely populated city in the country, though the actual capital- Brussels- is physically larger. The seaport is still one of the largest on the shores of mainland Europe even now.

You need to know how good the waffles are here. Belgians elevate eating and drinking to the level of an art form, one well on a par with any of the cake rich creations by Rubens that still adorn the walls of his amazing, Italian themed palazzo. And you do need to go and see that, right after you’ve finished your waffles. To take in both the Rubens House and it’s magnificent collection of classical milestones, you should allow at least a good couple of hours.

Take your waffles and coffee in one of the many cafes that line the edges of the stupendous Grote Markt, or Main Square. It’s a vast, gilt and gingerbread kind of Gothic homage; all the vast, glided confections here date from the medieval age, when Antwerp was one of the principal trading cities of Europe. There are also huge ornamental fountains here, awash with ornate, sodden statuary. They dominate the middle of the Grote Markt, a space that has quite as magnificent a scale and stance as St. Mark’s square in Venice. The attention to detail here is every bit as full blown, the opulence as rich and decadent as the local chocolate. Of which, more later.

The beauty of Belgian waffles is that they go with just about anything; strawberries, honey, whipped cream, or- my personal favourite- warm, melted chocolate. Many rate Belgian chocolate as the best in the world, and not without damned good reason. Try them with a wickedly rich cappuccino, and you truly are sampling the breakfast of champions. Or brunch…

Meanwhile, the square itself is alive with a veritable sea of humanity. Horse drawn, double decked coaches clop lethargically across the cobbled streets. Trams in shades of bubonic yellow slither like warp driven snails, packed to bursting with shoppers, schoolkids and office workers, starting their daily routine. If time allows while you’re here, try one of the delicious, locally made dark beers. Anything with even a hint of strawberry is usually unbeatable. 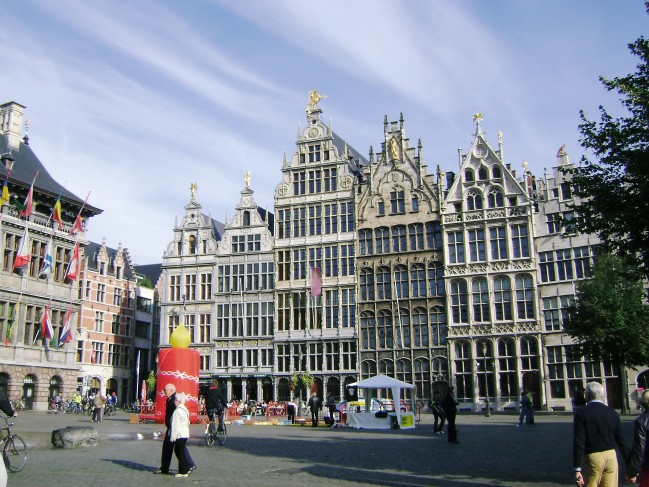 The Flanders region especially prides itself on it’s gourmet heritage. Some of the coffee houses are incredible feasts for the eye; huge, vaulting, belle epoque hangovers with stupendous chandeliers, and an attention to detail in the fittings and fixtures that would not disgrace the Sistine Chapel.

In Belgium, even the beers have their own sommeliers; true aficionados who can tell you exactly which of their incredible cheeses match their most esoteric micro brews of beer to gastronomic perfection. This is a heritage that is passed down through generations, and one that the locals take great pride in.

Belgium gave the world such great fictional heroes as Herge’s Tin Tin, whose fabled exploits are commemorated on some pretty nifty wall murals in the city centre, as well as Agatha Christie’s dapper detective, Hercule Poirot. Much of the street architecture here is early art nouveau, with orderly rows of houses flanked by avenues of stately plane trees. A lot of commuters here use pedal bikes; you’ll see them almost everywhere in the centre of the city.

Antwerp was the sugar capital of Europe in the Middle Ages, importing vast mountains of the stuff from Portugal, among others. Perhaps that goes a long way towards explaining the residual sweet tooth so common to all the locals here. The amount of chocolate shops in Antwerp is truly ostentatious, and obviously designed to ensnare the weak willed. How many can you actually walk past without succumbing to your inner Willy Wonka? OK… my record is two…..

All things considered, Antwerp is a beautiful, overblown temple to indulgence; a perfect setting for the temptations that roll out here day in and out. Even a few hours here will lighten your mood, if not your waistline. And, whoever said that you can’t have your cake and eat it had obviously never visited Antwerp.

I promise you; you can in Belgium’s good natured capital of gluttony and gratification.