I have a confession to make; I don’t normally ‘do’ cathedrals as a rule. It’s not that I don’t gaze in awe at the amazing architecture- I do- but, I tend to find that after a week or twelve days of cruising round the almost indigestible glut of cake rich, classical architecture that dominates the shorelines of both Scandinavia and the Mediterranean, a kind of glassy eyed stupor always seems to come at me with a cosh.

For want of a better phrase, I call it ‘cathedral fatigue’, although the same phrase can just as easily be ascribed to the plethora of castles, towers, turrets, keeps, spires and campaniles that are the stuff of legend. History is a rich, endless banquet of such treasures, but sometimes, just sitting down and having a coffee and a croissant at some pavement cafe is every bit  as rewarding in its own way.

But Helsinki cathedral has always really got to me. I think it’s one of the most simple and yet beautifully expressive examples of cool, neo- classical construction anywhere in Europe. It has grace, poise and beautiful proportions and- perhaps most importantly- a matchless location in the heart of Helsinki’s showpiece Senate Square.

The fact that both square and cathedral were designed by the same architect doubtless comes into play here. A German, Carl Engel, was responsible for construction that started in 1830, and concluded in 1852. Engel himself died in 1840. This makes the building much younger than most of the Gothic confections that flowered around most of mainland Europe. 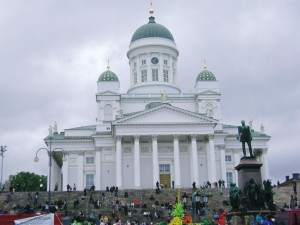 Like many buildings in Scandinavia, it is topped by a green copper dome, surrounded by four smaller domes. The cathedral was built out in the shape of a Greek cross, with each side featuring a cool, classical colonnade. Some say the entire concept is modelled on the monumental St. Isaac’s cathedral in Saint Petersburg. As Finland was a Russian vassal state at that time, this would make some common sense.

Later, post-Engel additions included the pair of free standing bell towers, but the original, harmonious exterior was enhanced rather than compromised by these. The cathedral today attracts an estimated 350,000 sightseers each year, and is still very much an active place of worship. The simple, clean interiors can seat up to 1,300 worshippers at a time.

Also worth knowing is that the brooding, typically gloomy crypt is now used primarily as a cafe. On second thoughts, maybe I’ll pass on that coffee and croissants….