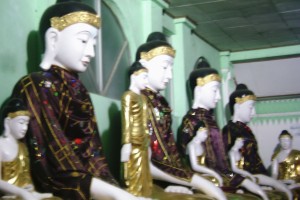 Myanmar. Burma. Two names, one state of mind. It’s like a country emerging slowly from a decades long coma. A very fragile flower, blinking itself uneasily awake in the first pale glow of the spring.

It’s a country years behind the west in terms of technology and infrastructure. Ancient British colonial buildings still line the waterfront streets of the old capital of Rangoon, now known as Yangon. Cell phone and internet reception is, at best, rudimentary.

The local buses are incredible; they remind you of nothing more than open sided trucks, full on the inside, with six or seven people sitting on the roof, and three times as many more hanging expressionless to the sides and the back. They thump along potholed roads and splutter around corners flanked by pavements that have lacked any kind of maintenance for decades.

Passage upriver to this mesmerising, magnificent city is an adventure in itself. A procession of sixty miles upstream, along the muddy, serpentine sprawl of the ancient Irrawaddy. Your ship ghosts silently past oxen grazing on river banks, while others pull carts overflowing with fresh fruit for the local markets. Fishing boats and open canoes dot the ancient waterway; some come bumbling past you, almost swamped with the catch of the day. The masts of trim, grey warships protrude skywards from their covered bases, competing with the first glittering pagodas for top dog in the viewing stakes. 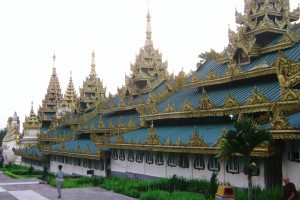 Temples as far as the eye can see

There are ranks of thatched roof houses on rickety stilts that rear up out of the muddy morass of the river, and lethargic, bumbling ferry boats that traverse the river at all hours of the day and night. And then, from the shimmering mid afternoon haze, the broad outlines of a city begins to materialise, like something from an Indiana Jones movie, set against a cloudless, petrol blue sky.

Old Rangoon. Modern Yangon.  Any dividing line between the two is impossible to divine. But one thread runs through both ancient and modern; the abiding influence of Buddhism.

You see it at it’s most potent in the incredible, 2,500 year old temple complex at Shweydaggon. If ever there was a kind of religious theme park, this stupendous place is surely it.

There is row upon row of glittering gold stupas, illuminated by scented candles, that shimmer almost shyly against the flaring purple twilight. Shaven headed monks in saffron coloured robes pray silently at the feet of massive, painted Buddahs. The scent of incense drifts like long deceased shades through the crowds.

Broad staircases lead to temples lined with rows of gold sheathed, praying deities a dozen or more feet high. There are beautiful, fragile lanterns, strung across the streets above your head. The jagged spires of temples and the subtle, sultry sound of gongs, calling the faithful to prayer. 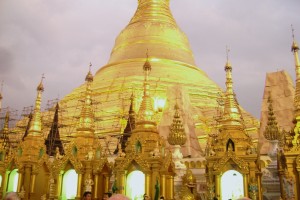 The air of serenity and unhurried calm is almost impossible to quantify, much less explain. Burma feels like a kind of Alice in Wonderland country with rough edges; there is definitely an element of having fallen through the looking glass and landing somewhere fifty years back in the past.

Nightlife is almost non existent in terms of what we understand in the west, though no doubt that will change as outside influences slowly seep into the country’s infrastructure to tempt the locals with all the ‘benefits’ of modern society.

Nothing summed up the country more for me than the constant procession of overnight, open topped ferries that chugged past us at all hours of the night. They literally run right ashore on the banks of the river in old Rangoon. From there, a veritable tidal wave of humans, animals and perishable goods poured into the graceful, groaning city waterfront, just steps from our berth in the middle of the city.

Burma is as far off centre and different as you are likely to encounter. I definitely recommend that you see it now, before it changes forever.

I got there via a fourteen night fly cruise on the small, highly styled Aegean Odyssey, operated by Voyages to Antiquity. During the course of a twelve night, round trip sailing from Singapore in December 2012, we spent three full days and two nights tied up in the centre of Yangon. An extensive, included series of organised tours showed us the highlights of this beautiful, bewitching land. For your information, the Aegean Odyssey will be returning to these same waters in the winter of 2014-15.

Like Loading...
This entry was posted in Stylish, elegant travel with some delightful twists and surprises... and tagged Burma, Cruise, irrawaddy, Myanmar, Rangoon, shweydaggon, travel, Yangon. Bookmark the permalink.