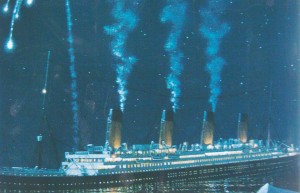 Down after Downton. But for how long?

It was Barry Norman who once famously said that the Titanic had sailed more miles on film than ever she did in real life.  The famously acerbic television host had a point, and that was many years before James Cameron’s swaggering, Oscar laden ship fest began its own, epic maiden voyage. We all know what followed from that.

But the Titanic first steamed onto the small screen on the first ever episode of the cult television series, The Time Tunnel. This pioneering show opened with the two heroes being transported back in time, landing on the decks of the doomed, westbound liner. The plot mainly centered around their desperate attempts to convince a blithe, contemptuous Captain Smith of the looming danger awaiting his ship.

And, when ITV created the fabulous period drama that was Upstairs, Downstairs, with it’s dramatic evocation of life right across the rigidly divided social strata of Edwardian Britain. it became almost inevitable that the Titanic would loom across the script at some stage. The disaster was used as an epic way of disposing of Lady Marjorie Bellamy, one of the principal characters. Quite odd, considering that the great bulk of the first class female passengers were the first ones into the lifeboats. But it was, of course, dramatic and glamorous. Rather like the Titanic herself, in fact.

The same device was resurrected almost half a century later, when Downton Abbey first hove into view on Britain’s televisions screens. A fictitious, unseen character was bumped off by the simple expedient of drowning them on the Titanic. But that was to be far from the end of Downton creator Julian Fellowes’ connection with the ship.

With the stunning success of Downton an established fact, and the centenary of the disaster itself looming, Fellowes seemed the obvious choice to mastermind an epic, four part mini series about the ship and her voyage to oblivion. His approach raised more than a few eyebrows.

Each of the first three parts introduced us to a series of characters- passengers in all three classes, as well as crew, from officers to stokers and stewards, Each episode ended just after the initial impact with the iceberg.

All the strands were tied together in a cataclysmic finale that really did tug at the heart strings. It was a one off, sweeping story that some found anti climactic, but many others loved. And, unlike the peripheral appearances and references to her in previous televisions series, in this one there is no doubt that the Titanic herself was the true star.

Whether we are talking about the small screen, future movies or, indeed, the stage, the one thing that’s absolutely certain is that the maiden voyage of the most infamous and spectacularly dramatised disaster in maritime history is anything but over…