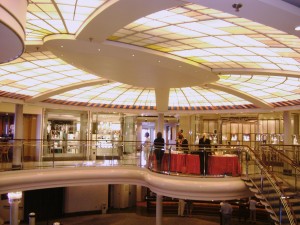 One of the big surprises of the recently published 2016 Crystal Cruises itineraries is a very welcome return to a short season of Alaska cruises, offered for the first time on the line’s flagship, the six star, 70,000 ton Crystal Serenity.

The ship will operate four, seven day sailings in June and July of 2016, on back to back itineraries between the ports of Anchorage and Vancouver, followed by a pair of ten night, round trip sailings from Vancouver, and closed by a final, ten night repositioning voyage to Anchorage, arriving there on August 16th.

Interestingly, there are no cruises pencilled in at all for the ship between then, and a departure from New York listed on September 17th. Details for three cruises- nos. 6319,6320 and 6321- are not on the current website listings.

Alaska cruises were once a mainstay of the Crystal summertime schedules, especially when the line was a three ship operation. Back then, the now moved on Crystal Harmony used to operate on a number of twelve night, round trip cruises from San Francisco; a role picked up periodically through the years by her younger sibling, the recently refurbished Crystal Symphony.

Two things stand out about these new cruises;  firstly, the fact that Crystal Serenity is spending an entire season away from Europe, where the hugely lauded ship always hitherto spent summers either in the Baltic or the Mediterranean.

Second is the fact that the ship is operating on short, back to back seven night itineraries- four of them in all- for the first time since her debut in 2003.

Ports of call visited on these voyages include Sitka, Ketchikan, Juneau and Skagway, as well as a day spent cruising both the Hubbard Glacier and the Inside Passage.

These cruises are beautifully timed to showcase the awesome natural splendour of Alaska at its absolute summertime best; with twenty four hour daylight in these latitudes in June, the Crystal Serenity offers up the stunning, majestic wildlife, flora and scenery of this singular state in surroundings of casual, spectacular elegance and indulgent luxury.

A real highlight of this trip is an overnight stay in Oahu itself. But for many Crystal veterans, the real pleasure will lie in the ability to savour no less than nine sea days on board one of the most fabulous, all inclusive luxury vessels in the world.