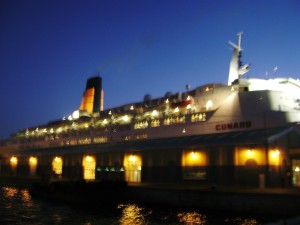 Twilight Of The Goddesses- the magnificence that is QE2

By 1980, as Ronald Reagan assumed the mantle of President in the USA, only one liner remained in seasonal service on the age old Atlantic crossing between Europe and New York.

For the great Cunard flagship, the eighties were to be a truly eventful decade, anchored by two seminal events. One of those was to put her in extreme danger, while the second would guarantee her life extension well into the next century. We’ll come to those in a moment.

But there was, in fact, another liner sailing the Atlantic on the run to Canada during most of the 1980’s; the doughty little Stefan Batory.

Originally built for Holland America Line as the Maasdam in 1952, she was acquired by Poland to operate a one ship, transatlantic service in 1969. She was a stout, feisty little lady, an unpretentious, solid little 15,000 ton vessel. Until 1988, she regularly forged across the Atlantic on a route that took her from her home port in Gdynia to Copenhagen, Rotterdam, London Tilbury and, ultimately, Montreal.

The Stefan Batory was a spiffy little ship, a million miles removed in temperament and styling from the glamourous Cunard flagship. Yet for years she remained enormously popular; decorated in a style that can best be described as rustic Polish. She was an immaculate little confection, and well known for her high standards of on board cleanliness. Famed for her excellent live music, this special little ship really merits a blog of her own and, in due course, she will have one.

But it was the QE2 that soldiered on alone on the age old run to and from New York. Between April and December each year, the great liner embarked on around a dozen crossings each way per year, between Europe and the USA. Her voyages generally took five days but, as the decade progressed, her increasingly unreliable turbines combined with a frequently capricious ocean to throw her off schedule more and more often. Something had to give, but in 1982, fate intervened in the most dramatic way imaginable.

The story of QE2 and her hectic, heroic dash to South Georgia and back is so well known as to need little repetition, and will be recounted elsewhere here in due course. What is worth remembering is that without QE2- and, indeed, Canberra– the entire operation would have been simply impossible. The war turned our way thanks to the massive trooping capacity of those two great ships. 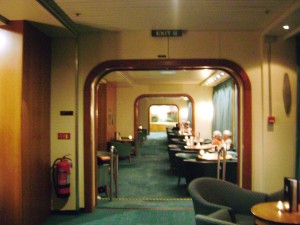 After a seven million pound, six week refit, the QE2 returned to service in a blaze of publicity in August 1982. For the first time ever, the great lady sported the true Cunard red and black colours on her funnel and, less well received, a smart new, pebble grey hull that soon proved hugely impractical to maintain. She also got a lot of interior refurbishing that helped to bring the thirteen year old ship right up to the latest tastes and styles. Arriving in New York for the first time after the war, the QE2 was given a tremendous welcome back to her second home.

But her temperamental turbines continued to give trouble. I sailed on her twice in 1986, and she was several hours late arriving on both crossings- one in either direction. But, by then, Cunard had already grasped the most painful nettle of all. Faced with the stark choice of either doing something truly drastic or losing the ship in as little as ten years, the line opted for the most dramatic refit ever seen on an ocean liner; the maritime equivalent of open heart surgery.

During six months, from October 1986 until April of 1987, the QE2 was converted from steam to diesel electric propulsion in the Bremerhaven shipyard of Lloyd Werft. The total cost- in excess of £100 million- was more than three times her original building cost over 1967-69.

Even those staggering figures do little to define this tremendous transformation. All of the steam powered machinery was taken out of the ship, together with all of the Clyde installed boilers. In their place came a dozen new, shiny MAN diesels.

These were designed mainly to slash the fuel consumption by almost half, and this they duly did. They also had the effect of increasing the speed of the QE2 up to around thirty four knots.

With the hew engines came a new funnel; a much more stout, elegant affair that filled out that proud, beautiful silhouette and made her more breathtaking than ever. Inside, years of mish mashed interior changes were almost completely swept away to give the venerable liner an almost totally complete, bow to stern Art Deco look. 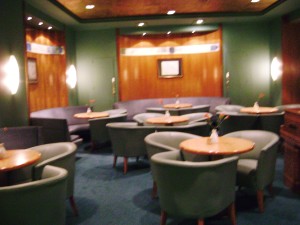 Inevitably, not everyone approved, but the overall new look was, quite simply, stunning. I boarded the QE2 in Southampton on April 29th, 1987, for what was billed as her ‘second maiden voyage’ to New York.

That day, QE2 had never looked more magnificent to me. The great new funnel with the familiar, bold Cunard black and red colours loomed over the terminal. And the hull literally gleamed; every last bit of paint accrued over the years had been sand blasted off her, right back down to the bare steel, and a single new coat of pristine charcoal, washed by a tidal wave of vibrant sunlight, now gleamed on the sun dappled expanse of Southampton Water.

The changes were so complete and all embracing that the ship should have been christened QE3. But, despite the fervour of our send off and the euphoria of being the first transatlantic passengers aboard the reborn Queen Elizabeth 2, there were more than a few storm clouds on the horizon.

We’ll get to those in another, more detailed blog about that infamous voyage. But, one by one, these problems were ironed out to vanish as completely as Atlantic fog. By the time that the QE2 completed her second, full decade in service at the end of 1989, the great lady had never looked better, inside or out.

Like Loading...
This entry was posted in elegant travel with some delightful twists and surprises..., Stylish. Bookmark the permalink.