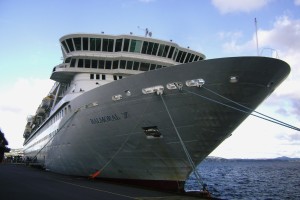 Balmoral, once the beloved Crown Odyssey

In the mid eighties, in what ultimately proved to be a case of ‘too much, too soon’, NCL went on what amounted to a buying spree straight out of the Carnival play book. Over fourteen years- from 1984 to 1998- the Caribbean cruise line originally founded by Knut Kloster absorbed a trio of famous cruise brands.

After suffering the maritime equivalent of acute indigestion, the restructured company aborted these same brands, and either sold their ships to other lines, or ultimately watched them go for scrap.

But many of those same names are still sailing, often easily recognised as their former selves. For lovers of cruise ships and ocean liners, there are few things more poignant than the sudden sighting of an instantly familiar ship, years later and half a world away. Familiar and wistful at the same time. It’s like seeing an old flame with a new hairstyle, often as not knowing that she’s now with another love. Bittersweet, indeed.

So let’s look at what is still out there these days, and just where they ended up….

That company originally flaunted a trio of sleek, bridal white show stoppers- the Royal Viking Sea, Star and Sky. They emerged in 1972-73 and, despite each ship being lengthened in 1981, all remained tremendously popular and upmarket; in fact, they were the benchmark for the likes of later, sybaritic show stoppers from Crystal to Silversea.

Happily, all three of these classic ladies are still sailing. The Royal Viking Sea today sails for the German company, Phoenix Seereisen, as the Albatross. The other two sisters were to enjoy a reunion, and are now both running in tandem for the Norwegian owned Fred. Olsen Cruise Line.

In 1989, in an attempt to regain past glories,  Royal Viking Line built a new flagship, the Royal Viking Sun. After a shaky period with Cunard/Seabourn, she also happily still sails on as the Prinsendam of the venerable Holland America Line, the company’s self-styled ‘Elegant Explorer’.

In 1990, the line took delivery of a small, 10,000 ton ultra deluxe cruise ship, the Royal Viking Queen. After a brief spell with Royal Cruise Line in 1996, she was sold to Seabourn Cruise Line, where she rejoined her two original sister ships under her current name of Seabourn Legend. She is currently slated to join the fleet of Windstar Cruises next spring.

The first major eighties pre- Kloster new build for this company was the glorious, 1988 built Crown Odyssey, a ship that soon gained a reputation for elegance and on board excellence rivalled by few.  After Royal Cruise Line was wound up, this lovely ship spent four years being employed like a ping pong ball between NCL and its last acquisition, Orient Lines.

Sold to Fred. Olsen in 2008, the ship was taken to Germany, and enhanced with the addition of a new mid section. Now sailing as Balmoral, she is the flagship of the Fred. Olsen fleet, as well as the largest ship. Cruising mainly out of Southampton, she remains a tremendously popular ship to this day.

Some of you will also remember the funky little Golden Odyssey, the diminutive little start up ship for this line. The 1974 built little beauty is still sailing today, though only as a casino ship out of Hong Kong. A far cry from her one time glory days.

Gerry Herrod’s legendary, as -was one ship line was bought by NCL in 1998, but the Orient Lines brand was struck from the company portfolio of offerings in 2008. Happily, the 1965 built Marco Polo continues to sail on for UK company, Cruise and Maritime Voyages. Still popular and beautifully styled, the veteran former transatlantic liner celebrates her fiftieth anniversary in 2015.

Long may all of these great, highly regarded and affectionately remembered ‘ladies of the sea’ continue to grace the oceans they still sail with such proud, singular style. Each and every one of them is an important, intrinsic link to our maritime past. And for the current, massively resurgent Norwegian, these are still the self same ships that proudly ‘flew the flag’ and enabled the brilliant, world class fleet of today to come to fruition. 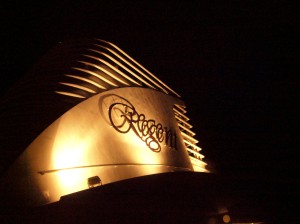 Will Regent and Oceania soon join the Norwegian fold?

Reports began to surface last night that Norwegian Cruise Line has submitted a three billion dollar bid to buy Prestige Cruises International. Prestige is a very upscale operator, having both upper premium Oceania Cruises and ultra deluxe Regent Seven Seas Cruises in its current portfolio. The talks are stated to be at an ‘advanced stage’.

The hugely ambitious move comes at a time when both of the Prestige flag bearers were on the cusp of far reaching changes in any event. Oceania is said to be on the verge of confirming an order for a second pair of sister ships for its first, highly successful dedicated new builds, Marina and Riviera. Meanwhile, Regent is eagerly awaiting the arrival in 2016 of the new, 700 guest all suite Seven Seas Explorer, its first dedicated new ship since the Seven Seas Voyager back in 2003.

As things stand, the eight ships that comprise the joint Oceania/Regent portfolio will complement the current, thirteen ships (with four more on order) in the Norwegian fleet. This combination will give the seagoing operation an extensive presence right across the mainstream, premium and deluxe cruise brands.

Cynics will no doubt recall how NCL  (as Norwegian then was) underwent a similar, massive expansion in the mid to late 1980’s. Then, the line absorbed both the very upscale Royal Viking Line, immediately followed by the premium grade Royal Cruise Line.

That was soon followed by the acquisition of Orient Lines in 1998.

Then, the company hoped that many mainstream passengers might be persuaded to move up to the more elegant, patrician brands. It ultimately failed, and almost took NCL down with it. The company was on the maritime equivalent of life support for years afterwards.

However, following a hugely successful IPO in January of 2013, Norwegian is in a far better position than it was back in the late eighties. The two newest ships in the fleet- Norwegian Breakaway and Norwegian Getaway- have been hugely successful, and the recipients of much critical acclaim.

Likely future consort, Oceania, is doing so well that it looks to expand to a seven ship operation within a couple of years, as mentioned above. Meanwhile, Regent Seven Seas continues to be one of the most consistently fully booked of the deluxe cruise lines, partly as a result of having the most truly all inclusive fares in the luxury segment of the market. And Regent is also the only line anywhere that can field a pair of all balcony accommodation sister ships- Seven Seas Mariner and Seven Seas Voyager. Over the last year or so, both of these ships underwent extensive, multi million pound enhancements that put them at a pinnacle of the cruising firmament.

For sure, interesting days are ahead for all of the protagonists in this menage a trois. As ever, stay tuned.