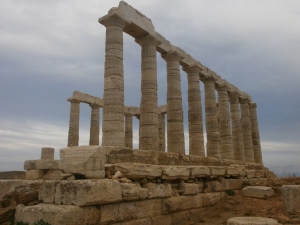 Piraeus is one very busy cruise port during the main Aegean cruising season; so much so, in fact, that the port authority is extending it considerably. But one company- Louis Cruises- has started exploring and utilising an alternative that the Greek government is keen to promote.

The town of Lavrion (Lavrio) lies some seventy kilometres south of Athens, in the area near historic Cape Sounion, with its magnificent, cliff top Temple of Poseidon. This alone is worth the journey south from the often crowded capital.

In terms of geography, Lavrion is actually closer to Athens International Airport than is Piraeus, and it provides a calmer, more sedate option for a pre cruise rest up than does the crowded, always frantic capital. 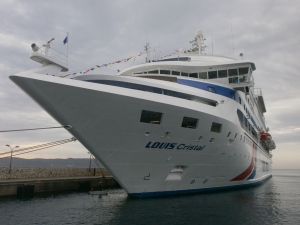 The Louis Cristal docked at Lavrion

Louis Cruises has created a tidy little, state of the art terminal in the town of Lavrion itself. Throughout the summer season, the company based it’s popular, spiffy little Louis Cristal down there for a series of seven night cruises to the Greek Islands and Turkey.

I boarded her there a couple of weeks ago, and the speed and ease of the boarding process was breathtaking; from pier to cabin in literally ten minutes. One week later, debarkation was a similar breeze. From first to last, it is a simple, seamless procedure that completely lances the boil of pre embarkation stress. It is well worth considering.

We stayed the night prior to cruising at the four star Aegeon Beach Hotel, located on the waterfront at Sounion, and quite literally in the shadow of the Temple of Poseidon itself. For those determined to make the hike to the temple summit- and it’s well worth it for the views- the walk uphill is a steep, exhilarating ten to fifteen minute climb. 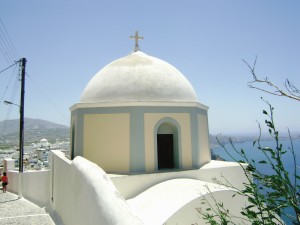 Santorini is on the Louis Cristal itineraries from Lavrion

With just forty five rooms, the hotel itself is comfortable, and the rooms have generous balconies overlooking the small beach. There is a pair of tavernas set just a short walk along the same beach. It’s a quiet, soothing little venue; a perfect panacea for the hassle of a long international flight. From here, a taxi to the port on embarkation day takes just ten minutes.

The only downside is that some might consider it too far from the attractions of central Athens. The Greek capital remains, of course, a ‘must see’ for many, but that in itself does nothing to detract from the ease and convenience of Lavrion as a port of embarkation.

Anticipating this, Louis Cruises runs a dedicated coach service to and from Lavrion from the main port of Piraeus on each sailing day. At twenty euros each way, it’s an efficient and cost effective way to make the two hour journey without having to worry about your luggage.

Lavrion definitely has a bright future as a port of embarkation, though it would certainly benefit from one or two more luxury class hotels in the town itself. Certainly, Louis Cruises is bringing the Cristal back for a second season of ex-Lavrion sailings in 2015, so something is obviously working well here.

Like Loading...
This entry was posted in Stylish, elegant travel with some delightful twists and surprises.... Bookmark the permalink.