Cunard had the most popular, two ship service on the post war Atlantic

It’s a throwaway remark, although one usually made in honest good faith. But how true is it? Here’s my take on it:

Cunard represents to many people an idea of what a transatlantic shipping line is (although the company itself has always been about far more than the Atlantic crossing) and they have very definite, heavily entrenched, ideas of what that experience should be. A nostalgic experience, where old world civility, values and dress codes rule. And those values should be enshrined, like the Ten Commandments, on every ship that flies the Cunard flag.

In short, even if times change, Cunard most assuredly should not.

And yet the line, like any successful shipping business, has constantly changed. How else do you suppose it has survived the better part of 175 years that encompassed terrible depressions and two global conflicts?

Of course, the line’s evolution is expressed front of house in the form of each successive generation of new Cunarder. And that is where the ‘old guard’ tend to recoil in horror over their tea and cucumber sandwiches. That is where QM2, like QE2 and yes, every new generation of Cunarder that came before her, become such potent lightning rods for those against changing a cosy, charmed universe that has become their utopia over the course of several decades. The shock of the new can be hugely unsettling. At least, to begin with, 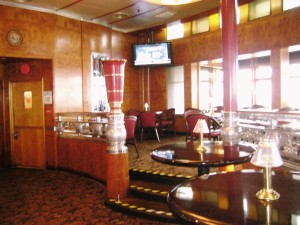 I can only begin to imagine the disdain that many veterans of the Mauretania, Aquitania and Berengaria must have felt when first confronted with the Odeon/Art Deco modernity of the brand new Queen Mary back in 1936. Gone was the Edwardian opulence and overblown swimming pools of old, replaced by a ship swathed in linoleum flooring, a hundred different wooden veneers, and starkly modern lighting and statuary. Yet few, if any, ships came to so typify the Cunard brand- and embellish it’s already formidable legend- than that same Queen Mary and her later sibling, the proud Queen Elizabeth.

Such was the pre-eminence of those two liners, and so great was the esteem in which they were held, that over time they became the exemplars of ‘what Cunard is’, writ large in a pair of illustrious, 80,000 ton ocean matriachs. They were adored and deferred to- the Mary especially- as if they were the seagoing equivalents of St. Paul’s, or even St. Peter’s itself. Twin cathedrals of the sea; the living embodiment of something timeless and intangible.

QE2; the shock of the new

So imagine the shock when QE2 in turn made her much delayed maiden debut in 1969. ‘Ships have been boring for long enough!’,shrieked one of the pamphlets that accompanied this ground breaking paragon; a vessel that so completely eschewed the styling and designs of her predecessors that it was a full thirteen years before the traditional Cunard funnel colours appeared on her. It must have been like throwing a brick through the cathedral window.

And- initially at least, the ‘old guard’ that had grown up with the previous Queens recoiled from this startling newcomer. And yet, over time and tide, QE2 would become the longest serving and most beloved of all the Cunard lineage; a diva of epic proportions, the Audrey Hepburn of ocean liners. A timelessly beautiful vessel that exhibited a chameleon- like ability to adapt to change, internally at least. Fires, storms, bomb scares, groundings, and even a war- the old girl sailed through them all with head held high. And she, in her turn, became the quintessential Cunarder.

For many, QE2 was Cunard. Like so many others, I was bound in hopeless, illogical thrall to her. She was my high water mark; the repository of fulfilled dreams and cherished memories alike.

And then, of course, came Queen Mary 2. Twice as large as her fleet mate. The largest liner ever built for the Atlantic, in fact. The same fine, deep hull, adorned with thousands of balconies and a shorter, less noble funnel. Huge, broad walkways and interior boulevards inside. And yes, for some of the veterans of QE2, not quite their idea of what Cunard is.

But times and tastes have changed, and the new ship- like every generation of her forebears before her- has to bow to that unstoppable tide. Now into her tenth anniversary, the proud and beautiful QM2 has matured like fine wine to become a legend in her own right. Smart and contemporary for sure, but also full of the old Cunard traditions.

The ship gives more than a very respectful nod to the string of illustrious legends that predated her, but adds her own, unique touches. A planetarium? Unthinkable on the Aquitania, but somehow just right for a modern, state of the art ocean liner that spends a week crossing the same ocean. How magical.

And if the ships change and evolve, the Atlantic remains as timeless and mercurial as ever. The sheer magic of crossing it by sea remains as spellbinding as ever. Something ageless that never gets old.

And, best of all, at journey’s end, as the great ship makes her early morning, ceremonial procession up the Hudson River past the Statue Of Liberty and the famous skyline, the adrenaline will flow like tap water. If you have an ounce of romance in your soul, the hairs on the back of your neck will stand on end, and you’ll feel something as amazing as it is intangible; something that the millions who arrive in New York by plane could never get near in a million flights.

Don’t worry; it’s nothing infectious, but it is unforgettable. And your grandmother? Well, she would have recognised that feeling at once.

Like Loading...
This entry was posted in elegant travel with some delightful twists and surprises..., Stylish. Bookmark the permalink.