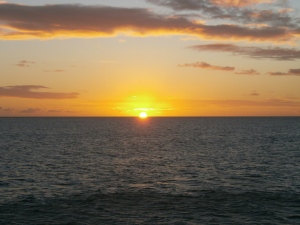 By the evening of Sunday, December 21st, the Queen Mary 2 was just hours from her New York arrival. The weather had calmed, though it was still cold outside. Inevitably, our thoughts turned to our imminent reunion with reality, and our onward travel arrangements for the next day.

That last night on board passed as all final nights on a westbound crossing do; a frantic whirl of final drinks parties, lines at reception checking on final arrangements, the exchanging of contact details, last pictures and, of course, that final farewell dinner.

At some stage in the small hours of the morning, the Queen Mary 2 threaded her way upstream, passing the Statue of Liberty and the floodlit, steel and concrete forest of Manhattan, before making her way towards Red Hook. By the time I peeped out through the curtains of my room, the great liner was already docked, shackled to her specially built pier in Brooklyn.

The day was grey, and overlaid with swathes of mist. It matched my mood perfectly. I literally did not want to leave the Queen Mary 2, but knew that I had to.

One last. leisurely breakfast allowed me time to say goodbye to most of my table companions, and to thank the serving team that had looked after us so well for a week on the ocean. It would become more leisurely than anticipated, thanks to the shore authorities.

For reasons best known only unto them, the powers-that-be in Brooklyn held up the debarkation process, and a good few impatient passengers were left cooling their heels. This was much to the chagrin of the Cunard staff on board, who had no control over such events. They had 2700 passengers, plus their luggage, to disembark, plus another 2700 to embark for the Caribbean. The entire vast ship had to be cleaned, re-stocked and refreshed from bow to stern. Every single moment is precious on turnaround day.

We were finally cleared at around eleven 0’clock. The actual debarkation process and luggage collection took about an hour. It was painless, efficient and, together with two working contractors I had met on board on the last night, I took a cab to JFK airport.

The drive took around an hour. It cost $99, and all three of us later confessed our amazement at surviving the transfer. To call the driver ‘fast and furious’ would not be to do him discredit. We arrived at JFK both shaken and stirred.

The price was a good deal between three people; however, for individuals and even couples, the Cunard coach transfer service was a better deal, at $44 per head. A later Cunard option offered a sightseeing coach tour of New York, which finished at the airports (both Newark and JFK were offered) for around three in the afternoon. This costs $99 per person, and seems a good deal for those with late departing flights. It runs subject to numbers being available

All three of us fell into the late departure category but, with the Christmas rush season upon us, we all agreed that it was best to try and get through the refugee sized queues at check in as quickly as possible. With ample experience of flying on this day in the past, I was dreading JFK and the whole painful mess.

And then a real life, Christmas miracle happened….

Not only were the British Airways desks at Terminal 7 open a full six hours before departure, but we were the only three people in line. We were processed- and politely so- with incredible ease. But it was what followed that really took the wind out of our sails.

We all know the TSA security preparation drill, right? Remove all coats, shoes and belts. Anything metallic out of your pockets. Laptops removed from holdalls…

Well, not this time.

Notices before the scanners informed us that there was no longer any need for any of this hassle. Hardly daring to believe what I was reading, I rocked up wearing the lot. And I was processed, without fuss or effort, in a matter of minutes.

From arriving curbside at JFK, we had completed check in and security, to go airside in less than thirty minutes. On one of the busiest, messiest travel days of the year. Shocked? Yeah. Me, too.

So, there was time to eat, do some last minute Christmas shopping (some great warm weather clothing at good prices here) and have a final, farewell beer. My British Airways flight was called bang on time.

Right at the last minute came an early Christmas present; an at-the-gate upgrade to Club Class. I left New York with a smile on my face.

My last sight of the Queen Mary 2 had been as she sat alongside the Brooklyn terminal. I glanced back one last, long moment at her. The great, black and red Cunard smoke stack loomed sharp and proud against the grey skies and ranks of serried skyscrapers.

After a week of slicing through the Atlantic on this vast, wonderful creation, it was strange to see her stilled, silent and waiting; a stalled colossus, looming over the bustle all around her.

And that same evening, as my flight arced abruptly into the freezing Manhattan skies, somewhere down below, the Queen Mary 2 was heading downstream, bound for the balmy, welcoming waters of the Caribbean at Christmas.

If her passengers have half as much fun on board as we did, then my guess is that they will be going home with smiles on their faces, too. Quite the adventure, all things considered.

Like Loading...
This entry was posted in Stylish, elegant travel with some delightful twists and surprises.... Bookmark the permalink.