In something of a surprise move, Cruise and Maritime Voyages has laid out details for a first ever world cruise for 2017. Utilising the newly refurbished Magellan, the ambitious, four month long global odyssey will sail from Tilbury on January 5th, 2017, and return to the Essex port on the following May 5th.

In between, the 46,052 ton, 1,250 passenger Magellan- originally built as the Holiday for Carnival back in 1985- will cut an ambitious furrow through some of the most magnificent, remote and remarkable waters on earth, showcasing an entire conga line of must see highlights including the Azores, the Panama Canal, and the highlights of French Polynesia.

Then it’s on to Australasia, and the fantastic cultural melting pots of the Far East, followed by India and a Red Sea transit, before a final series of adventures around the Holy Land, and a last, languid sweep through the springtime Mediterranean, prior to returning to the UK.

In addition to the grand event itself, a series of no less than nine, separate fly cruise sectors have been provisionally pencilled in. These will allow passengers to board and leave the Magellan at a whole raft of signature ‘greatest hits’ ports including Auckland, Hong Kong, Singapore and Sydney, Australia.

Thus far, five of the ports en route are offered with an overnight stay on board. These are; Cairns, Hong Kong, Phu My for Ho Chi Minh city, Singapore, and Sydney.

For single passengers, this voyage represents an excellent bargain, with rates coming in at £13, 269. Twin saver rates come in from around £8,999- roughly equivalent to around £75 per day per person. This is on sale as of now.

Although Cruise and Maritime has run several longer cruises to both the Amazon and the Caribbean with both Magellan and Marco Polo- plus a series of ongoing, old style ‘liner’ voyages with the Astor- this first, world cruise is an enormously significant statement of intent from a company still not yet a decade old.

Magellan herself offers some 726 cabins, all of a good size, and a vast amount of open deck space, as well as an entire, interior, window walled boulevard of shops, bars and clubs. And, with a trio of dining venues on board, the ship- recently extensively renovated- could very well prove to be a formidable new competitor, especially for the no-fly types wanting to take a little ‘slice of home’ with them as they voyage around the globe.

Interesting development, for sure. As ever, pray stay tuned. 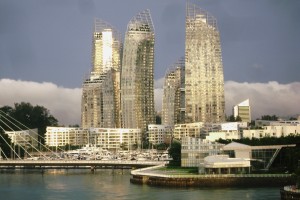