Sailing day; it still leaves me with that ‘kid-on-Christmas-Day’ feeling….

Add in the fact that I’m sailing on one of my favourite ships-the magnificent Marco Polo, celebrating her 50th anniversary this year-and you’ll perhaps understand why my adrenaline was running like tap water as we pulled up at the North Shields passenger terminal.

Originally designed to service the overnight ferries sailing to and from Amsterdam, the terminal- used for Newcastle/Port Of Tyne sailings- doubles up for cruise use on seasonal summer sailings from the Tyne. And, for someone used to making the long treks down to Southampton, Dover and Harwich to board a ship, the sheer ease and convenience of being able to rock up at my local home port never fails to amaze me.

Check in was arranged deck by deck and, though the ship had sold out (Capacity 800, adults only), the boarding process took exactly twenty five minutes. That’s from entering the terminal to walking into the warm, Balinese themed lobby of the Marco Polo. Pretty damned good, that.

Though she is as pretty as a postcard, the Marco Polo remains refreshingly intimate. More comfortable than luxurious, the feeling of boarding her is akin to sagging gratefully into a pair of favourite, comfortable slippers. There’s a feeling of gentle, contented ease that comes from being cocooned in something that is at once instantly welcoming, and yet wonderfully familiar. On both counts, the Marco Polo hits the bullseye.

A thorough but relatively short lifeboat drill follows, by which time my luggage is already outside my room. I have time enough to check out the daily programme, before being pathetically overcome by the need for that first, invariable ‘bon voyage’ drink.

Almost inevitably, I take this on the gorgeous, curved terrace that frames the outside of Scott’s Bar, overlooking the stern. Sat back on cafe chair, feet braced against the deck railings- the classic Marco Polo cruising stance- I tip my vodka and cranberry briefly in the direction of ‘Rudy’, the statue of Rudolf Nureyev that forms a focal point on the aft lido deck. Rudy and I have become well acquainted over the course of three decades.

This contented little reverie is gently shaken by a muted trembling that passes through the deck rails; one that always sends a shiver of delight running up my spine. I glance to port and, to my sheer, infantile joy, the Port Of Tyne terminal is already falling away like a fading souffle. The gangway is gone, as are the ropes. Those last, little tenuous links with reality are no longer needed.

Poised and perfect as a swan, the Marco Polo gives a first, tentative surge forward. Her whistle roars out a stately triple salute to the Tyne as a squadron of gluttonous, over fed gulls shriek, scream and swoop in her wake like so many demented dive bombers. People on house balconies lining the stately, steel grey river look over and wave as this fantastic floating time machine surges majestically past them, almost close enough to touch. Another vodka and cranberry appears at my elbow. I can’t help but smile.

Now out, past Tyneside’s historic breakwater, following in the wakes of the Mauretania, the QE2, and many other famous legends of yesteryear. Out of the Tyne, on a ship still writing chapters in her own, imperishable legend. One we are sharing, even as we savour it.

The North Sea welcomes us with benign skies, and sparkling sunlight dancing on languid, lapping waves that seem to speed the lady on her way. A stately, gentle roll begins to assert itself; the immutable overture to our voyage up ahead. Feet back up on the railings, I sit staring at the clouds, drifting by in the sky like fleets of ghostly galleons.

A sense of freedom dances in the ether around me. It clinks the ice cubes together in my glass as if in celebration. At least, that’s how it seems right at that moment.

And so, we are off. It begins again…. 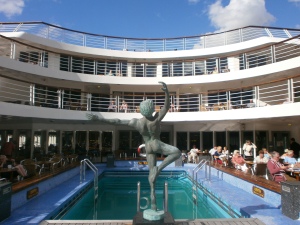