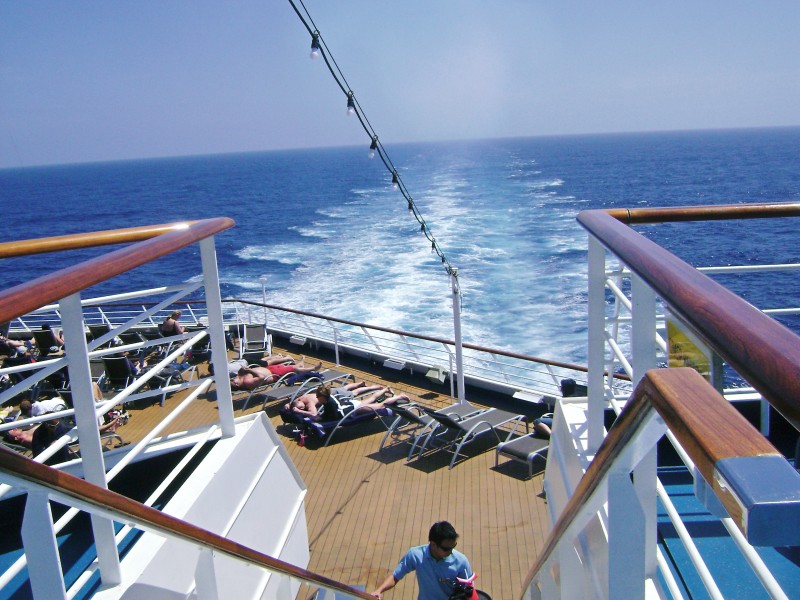 The stylish Carnival Splendor is Bermuda bound in 2016

Over the past couple of decades, the summer Bermuda cruise season has become more or less dominated by a ‘big three’ composed of Celebrity Cruises, Norwegian Cruise Line, and Royal Caribbean International.

So complete is this dominance that many potential Bermuda bound passengers overlook other possible options for travelling to the island from a number of different American ports.

For 2016, Carnival is offering no less than ten ex-USA sailings to Bermuda on five different ships, each of which offers at least one overnight stay, and some offer two. Like most ships these days (exception; the four 2016 sailings by Holland America Line), all ten of these calls will use the main mega ship berth at King’s Wharf, on the western side of the island.

So, for those of you that might want to add a little ‘Fun Ship’ style and frivolity to the peace and beauty of Bermuda, here are the options available to you throughout 2016.

She will also offer a pair of seven night cruises from the same port, departing on September 4th and 18th.

From Charleston, SC, Carnival Ecstasy showcases a pair of seven night sailings to Bermuda, departing on May 12th and November 6th, respectively.

Carnival Victory offers a southern twist on the classic Bermuda cruise experience, with a one off, eight night sailing that departs from Port Canaveral on May 19th.

Last, but not least, the Carnival Splendor features a nine day Bermuda cruise, sailing from Miami on May 26th. This cruise features a single overnight stay in Bermuda, and additional Caribbean calls at Amber Cove in the Dominican Republic, and also Grand Turk, in the Bahamas. This one is a particularly lovely combination.

For the UK market, many of these cruises can be packaged with stays in landmark cities such as Miami and New York. And, for something more than a little different, you could combine a Bermuda cruise with a stay in the genteel, old world pace and grace of beautiful Charleston.

All of these cruises present good options to enjoy this beautiful, still very much off the beaten track destination, at the best time of the year.

In the summer of 2008, Carnival took delivery of it’s only one off ship design; the 113,000 ton Carnival Splendor. Intended for year long cruises to the Mexican Riviera, the new ship first made a few cruises in Europe. before crossing the Atlantic.

The immense ship- the largest ever built for the line up to that time- then made a series of sensational voyages that took her right around the coast of South America, before finally arriving in Los Angeles, ready to begin the season of cruises she had been intended for.

However, just before the seven night cruises began in earnest, the Carnival Splendor ran a one time, five day cruise down to Ensenada and Cabo San Lucas. It was an itinerary that has never been repeated since.

These pictures were taken on board during the course of that cruise. As you will see, the Carnival Splendor represented a total, Farcusian experience in terms of interior decor. She was, in fact, the last Carnival ship for which the legendary Joe Farcus had complete interior design responsibility; a role he had fulfilled with dazzling success ever since 1972, and the inauguration of the pioneering Mardi Gras.

Port side view of the Splendor 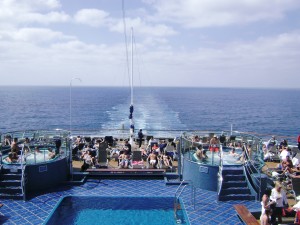 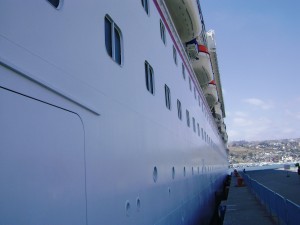 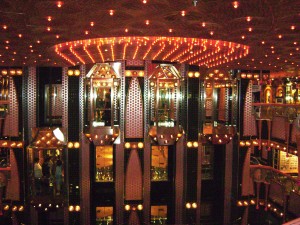 Part of the main staircase

Funnel and the far horizon 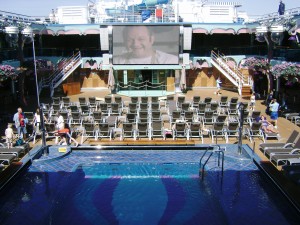 Looking down to the big screen 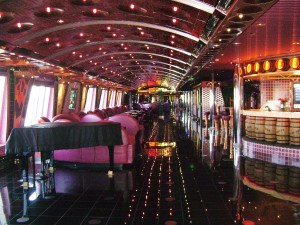 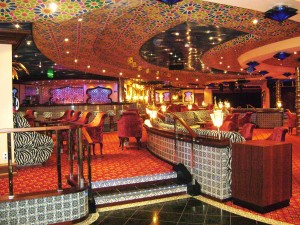 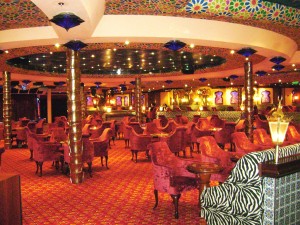 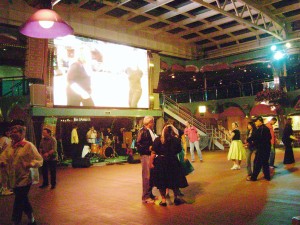 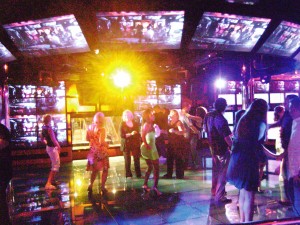 The disco on Splendor 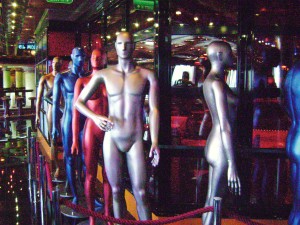 Statues outside the disco 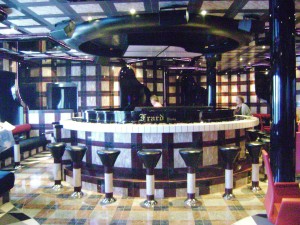 Entrance to one of the main restaurants

In a move that is sure to make the opposition sit up and take notice, Carnival Cruise Lines has dropped single passengers upplements for a host of Bahamas and Caribbean sailings over the course of 2014.

The sailings cover a range of ports, itineraries and durations. Galveston, Miami, New York and Port Canveral are just some of the principal departure points for the programme of discounted voyages, ranging from three to eight days in all.

Typical prices include an eight night, Caribbean cruise on Carnival Freedom, in a 225 square foot ocean view stateroom from just £419. Shorter breaks include a three night Bahamas jaunt aboard the Carnival Sensation, with an inside room available for just £139.

Fares do not simply cover the older ships, either; they are even available for some departures on the current Carnival flagship, the 130, ooo ton Carnival Breeze, as well as the seasonally New York based Carnival Splendor.

The axing of these single supplements makes the Carnival product a very attractive buy for single passengers; the drop in price goes a long way toward offsetting the negative effects of constantly increasing air passenger duty on transatlantic flights as well.

Carnival has never traditionally built single cabins into its ships, so these fares are an obvious, if belated response to the success of single cabins offered aboard the ships of rivals Norwegian and, to a lesser extent, Royal Caribbean. However, even the standard inside cabins on Carnival ships come in at around 185 square feet- roomier than on most of their rivals.

With more of its ships remaining year round in the Caribbean and Bahamas trade than any of its competitors, Carnival offers far more capacity and diversity than any other line. As well as the ports cited above, the line also offers sailings from Fort Lauderdale, Tampa, Jacksonville, Charleston, Mobile and New Orleans.

On the west coast, Carnival offers short sailings to Mexico from both Los Angeles and Long Beach; it is also slated to resume sailings to the Mexican Riviera in November, after an absence of several years.

There’s no doubt in my mind that these new, attractively priced fares will have other lines looking to their laurels. Within the Carnival family of companies, it might lead to something similar happening and both Holland America and Princess Cruises.

All of this is a very welcome development for the solo traveller, and not before time, either. For details of all the Carnival sailings, you can check out the UK website; http://www.carnival.co.uk

Carnival Cruise Lines has announced that their dedicated, year round New York based ship, Carnival Splendor, will be leaving the city to be redeployed from Miami, effective November 9th 2014.

The 113,000 ton, 3,006 passenger Splendor has spent a few seasons in year round sailings from New York, mainly to the Bahamas. There is usually at least one Bermuda cruise per season, pencilled in for June next year.

As of yet, no replacement vessel has been announced, but it is unlikely that Carnival will leave the lucrative, year round north east trade solely to rivals Norwegian Cruise Line and Royal Caribbean.

Carnival Splendor was built by Fincantieri in Italy, and made her debut in 2008 as a one off, stand alone ship, the only one of her kind in the Carnival fleet. She spent her first months cruising in Europe, before making a headline grabbing cruise around South America, prior to an eventual arrival in her home port of Los Angeles.

From there, the ship made an inaugural, five day run down to Ensenada and Cabo San Lucas (I was aboard) before settling in to the week long circuit down to Cabo, Mazatlan and Puerto Vallarta.

It was in this role that she suffered a highly publicized engine room fire that left her disabled and adrift for several days. The ship had to be towed back to San Diego for costly repairs that lasted several weeks.

After a couple of more seasons on the LA run, Carnival Splendor repositioned to New York via South America- the ship is too big to transit the Panama Canal- and she has remained a popular staple on the year round Bahamas run ever since. Unlike the slightly smaller Conquest class, Carnival Splendor has a sliding glass roof over her central, twin level pool area, making her the ideal ship for winter sailings to the Bahamas.

And hello to sultry Miami

Her redeployment to Florida ups the number of Carnival ships sailing from Miami/Port Everglades to seven. Offering everything from three to eight day itineraries, the Carnival septet is expected to carry something like 1.2 million passengers between them per annum.

The Carnival Splendor will reposition to Miami via two eight day cruises, the first from New York to San Juan, and then a second leg from San Juan to Miami. Once in the Florida port, she will begin alternating, seven night Eastern and Western Caribbean itineraries, sailing every Sunday.

Details of a replacement ship out of New York will be listed here when available. Stay tuned.

Bermuda is a famous beauty

Bermuda is looking forward to a bumper 2014 cruise season, according to a report in the Bermuda Sun newspaper.

Well, at least a part of it is.

The north western port of Kings Wharf, hugely and extensively developed for cruising since 2004, will play host to no less than 132 cruise ship calls, disgorging a total of 356,000 passengers onto the island in the peak season between May and October.

Meanwhile, the former landmark ports of Hamilton and St. George’s are practically barren all year round.

New to the island next year is Royal Caribbean International’s Vision Of The Seas. The recently refurbished ship will sail three ten night, round trip cruises from Fort Lauderdale on June 9th, August 18th and September 1st, 2014. Each will spend three days and two nights in Bermuda, as well as making calls at Charleston, Nassau, and the company’s private island at Coco Cay.

Sister company, Celebrity Cruises also offers nineteen round trips from New York on the Summit, the line’s Bermuda stalwart of several years past.

Meanwhile, the ground breaking Norwegian Breakaway returns from New York for some twenty-two calls over the course of 2014. The new ship had a hugely successful first season in 2013, during which she brought some ninety thousand passengers to the island, making a net contribution of some $26 million to the Bermuda economy.

Rounding out the roster of Bermuda round trip ‘regulars’ over 2014 is the Boston based Norwegian Dawn, with some twenty-two round trips on sale.

Side streets of St. George’s, Bermuda

The island is also expecting a one off call from Carnival Splendor in June, and there will be three calls from Princess, with Emerald, Ocean and Ruby Princess making one visit each.

The Bermuda government is also said to be courting Germany’s Aida cruises with a view to future business. Over the last year, the government has made key concessions to cruise lines, including allowing them to open their casinos while docked in Bermuda for the first time ever. The move was widely seen as a response to the exodus of lines like Holland America, the last bastion of the typical ‘Bermuda run’.

The 2014 roster of Bermuda arrivals is expected to contribute something like $90 million in total to the Bermuda economy in all. As well as disposable income coming from passengers in terms of shore excursion sales, meals and drinks and taxi fares, these figures also take into account the spending patterns of off duty cruise members, taking time out ashore at the end of their working days and nights.