In the world of modern cruising, the miraculous salvation of the former Classic International Cruises fleet must rank as the most staggering comeback since Lazarus. OK, well at least since Take That.

When the banks foreclosed on the fleet of classic liners so lovingly maintained by the late, great George Potamianos, scrapyard owners everywhere opened their cheque books and sharpened their knives. And who could really blame them for scenting blood? 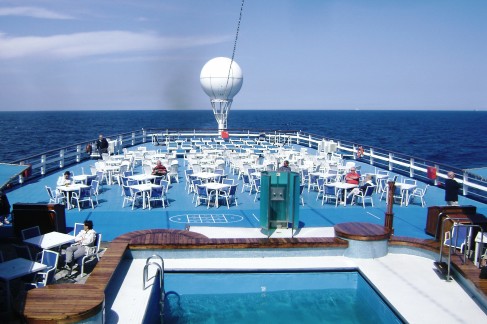 Here was what had been a modern cruise accountant’s nightmare. A fleet of low density ships, floating anachronisms that were incredibly expensive to sail and maintain. Labour intensive, with only a handful of balcony cabins across the five ships. A complete lack of modern, time killing attractions and, above all, their sheer age working relentlessly against them. Though I remained outwardly optimistic, in my heart I had also written those lovely, fondly remembered ships off.

I have never been so glad to be proven wrong.

In a move that stunned and surprised everyone, four of the five ships have been bought from the banks by Doctor Rui Alegre, a Portuguese business man. He immediately reinstated the stalled revitalisation of the handsome, 1961 built Funchal. Now, after several years of stop-start work, the ship is scheduled to start sailing again under charter this September. This was originally thought to be in Northern Europe, though another source has the ship going to the Mediterranean.

Baby of the fleet, the 6,000 ton Arion has now been renamed as the Porto. She now sports a smart black hull, and a black and yellow funnel bearing the logo of the newly named Portuscale Cruises. At the time of writing, she is undergoing final refurbishment in Lisbon.

Nearby, the classic, 15,000 ton Princess Danae is being refurbished, and has been renamed the Lisboa, in honour of the Portuguese capital.

Athena, the former Stockholm, is already back at sea, operating charter cruises in the Black Sea for a Russian firm, under her new name, Azores.

It is expected that all the ships will be up and running by 2014, though whether some or all go out on charter is as yet unclear. Portuscale is being quite tight lipped. Indeed, silent.

Also encouraging is the revival of the Classic International Cruises brand itself, with the Potamianos brothers-sons of the original owner- having completed the repurchase of the 15,000 ton Princess Daphne, currently laid up in Crete. Again, details are thin on the ground, but it seems that the brothers have gone to great lengths to buy back the ship so beloved of their late father.

It remains to be seen how this small, beautifully styled band of survivors can buck the trend of a depressed market that is largely dominated by mega ships. But, having seen these ships come so far, and watch them re-emerge after defying all the odds, it would be a rash man indeed who would bet against them.

I’m not that man. I wish both operations smooth seas, and a rising tide of good fortune.