Yesterday’s sad departure for the scrapyard of the ailing Lisboa, ex Princess Danae, throws a pretty stark light on the state of parent company, Portuscale Cruises.

With no news of any employment for the company’s flagship, the beautifully restored, 1961 built Funchal, or the smaller, 6,000 ton, 1965 built Porto, things are looking anything but good.

Mercifully, the one success story in this bleak litany seems to be the 1948 built Azores, soon to be renamed as Astoria. The former Stockholm has been chartered by British operator, Cruise and Maritime Voyages, for a few years. In turn, she will go out on an extensive, French based charter for most of 2016. So, for the future at least, her future seems assured.

The potential loss of Funchal and Porto would be devastating for those who love smaller, classically styled ships. Fewer and fewer of these charismatic dowagers remain in service with each passing year. And, while it does not actually bear thinking about, the possibility that these two fine ladies might follow Lisboa on her last, lonely voyage can no longer be discounted.

I hope and pray that this can be avoided. More than ever, the maritime community needs to be able to experience ships that come with no other gimmicks than that of being at sea on a solid, dependable, classically styled ship.

Fingers crossed on this one. As ever, stay tuned. 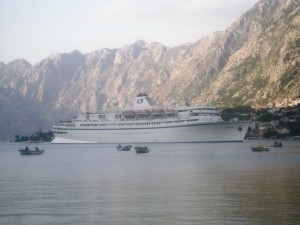 The Athena, currently sailing as the Azores for Cruise and Maritime, off Kotor, Montenegro