Liverpool’s attempts to re-establish itself as a premier UK cruise port have received a massive psychological boost, with the news that Cunard will celebrate its 175th anniversary in 2015 with a historic meeting of all three current Cunard Queens in the Mersey port on May 26th, 2015- 175 years after the diminutive paddle wheeler, Britannia, inaugurated Cunard service from Liverpool to the New World. Flagship Queen Mary 2 will actually arrive on May 25th, and overnight on Merseyside.

It is sure to be an incredible spectacle, and a massive media event. And, with Cunard having been largely homeported in Southampton for the better part of a century now, it’s perhaps worth remembering just how close the links once were between the first- and last- company offering a regular transatlantic service, and the famous port on the North West coast of England.

At the turn of the 20th century, Liverpool was the pre eminent port of the British Empire, at a time when it covered fully one quarter of the earth’s surface. The Royal Navy and the British Merchant Marine were the largest of their kind in the world. From Liverpool, liners sailed from the famous Landing Stage to quite literally all corners of the globe.

The flagship service to New York was handled by the newest and latest steamers of those two age old rivals, Cunard and White Star. Both companies had their head offices in Liverpool, and their ships came and went with the punctuality of express trains for decades. Famous names such as Campania, Lucania, Oceanic, Celtic and Caronia all began their lives on the Liverpool to New York run. Some continued to sail it right through their long working lives.

The Mersey port basically got used to being top dog, a position that became seemingly unassailable when Cunard inaugurated the 1907 express service with the immortal Lusitania and Mauretania. And, in the last days prior to the outbreak of the Great War, the palatial new Aquitania became the largest and most opulent liner ever to call Liverpool home. She made just three round trips before the conflict erupted. 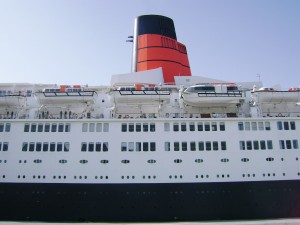 But there had been straws in the wind as early as 1907, even as the Lusitania made her record breaking debut. That same year, the White Star Line quietly moved it’s first string service to New York- the so called  ‘Big Four’- out of Liverpool, and down to Southampton, on the channel coast. The burghers of Liverpool were mortified; but White Star knew exactly what it was doing.

For a start, the Hampshire port was unaffected by the fast tides that saw the waters in Liverpool rise and fall a full thirty-three feet, twice a day. It also provided better wharfage and docking facilities than Liverpool. More importantly for White Star, Southampton offered easy, convenient access to channel ports such as Cherbourg, a rapidly growing place of embarkation and disembarkation for Europe bound Americans, while still being convenient for taking on the masses of Irish emigrants that kept the coffers of both major players buoyant.

Last, but not least, strong winds that buffeted the Mersey had the habit of blowing docked ships clean away from their moorings, with potentially dangerous ramifications. Both the Lusitania and the Mauretania suffered just such mishaps and Cunard, not unreasonably, became increasingly alarmed by such events.

It was amazing that Cunard stuck with Liverpool as long as it did; the premier express service continued to sail from there until the outbreak of war. But once the conflict was over, even that company bit the bullet. The surviving Aquitania and Mauretania left the Mersey for Southampton, never to return. The baton of number one passenger terminal had unquestionably passed to the Hampshire port. 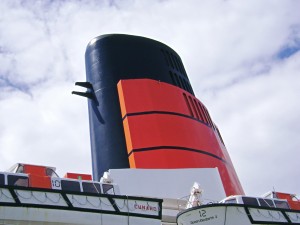 QE2’s funnel became a familiar sight on the Mersey

Even post war, Cunard ran it’s premier passenger service to Canada- the 20,000 ton quartet of Ivernia, Franconia, Saxonia and Carinthia- from Liverpool. This continued sailing right up until 1967, by which time the liner trade- both from Liverpool and Southampton- was pretty much dead in the water in any event. It would take the slow initial growth of cruising to see any sort of revival for both ports.

But Liverpool has always remained a truly mythical port, steeped in memories and maritime lore. And, if anyone needed any proof on that subject, the first, emotional arrival of the Queen Elizabeth 2 in the Mersey in July, 1990, on the 150th anniversary of the maiden crossing by Britannia, definitely put that to rest. More than a million people blackened the banks of the river to see the legendary Cunard icon on that incredible day. Subsequent calls- and I was on board on both her 25th and 40th anniversary cruises- merely reaffirmed the deep, still unbroken bond between Cunard and it’s true, spiritual home.

So the convergence of the current trio of Cunard Queens on the famous Mersey waterfront in 2015 is sure to be a huge, highly charged media event. I am constantly amazed by the way at which even people who normally have no interest with either ships or the sea, can be moved and carried along by just such occasions.

And, with the iconic former Cunard building open for business as a cruise terminal by then, passengers should be able to embark directly aboard the monolithic Queen Mary 2 for her anniversary crossing on July 4th, 2015, an evocative ten day tempter to Halifax, Boston and, ultimately, New York. With this representing the first opportunity to sail direct from Liverpool to New York in half a century, I fully expect it to sell out in a couple of hours once bookings open.

For those lining the Liverpool waterfront, as well as those actually embarked on the Cunard trio on the day itself, this is sure to be one of those great landmark events that stay with you, long after the day itself is history.